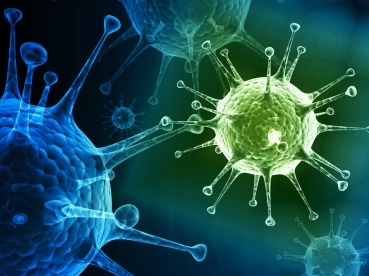 The first description we have of the influenza virus was from Hippocrates (my hero!) 2400 years ago. He dealt with it every winter, endlessly, just as we do now. Nowadays it makes between 3 and 5 million people sick each year, and kills 250 to 500 thousand people annually. In the US we average 200 thousand hospitalizations and 36 thousand deaths yearly. Persistent, nasty little bugger.

The Anatomy of a Flu Virus:

The influenza  virus is a tiny spherical particle, only 80-120 nanometers in size. It would take a million of them standing in a row to make a 1 centimeter line. Its core is made of 8 separate segments of RNA (we humans have DNA). This core is surrounded by protective proteins and an envelop with 2 types of “glycoproteins”–the famous Hs and Ns you hear about when people talk about which type of flu is causing problems each year: Hemagglutinins and Neuraminidases.

NPR has a very cool video of the flu virus invading a cell here. The “key” in the video is the hemagglutinin.

How the Virus Works:

The Neuraminidases (Ns) release the progeny of that prolific particle from that cell so that the little critters can spread further through your body.

How we Fight it:

The Hs and Ns are the molecules our immune systems build antibodies against, whether we catch the flu or just get exposed to the dead virus in the annual vaccine. The Hs and Ns are also the targets for antiviral drugs. There are 16 different Hs and 9 different Ns. Humans are usually infected with H 1, 2, or 3 and N 1 and 2.

There are three groups (genera) of flu viruses in the family Orthomyxoviridae. (I love that word: Ortho-myxo-vir-i-dae.) The three groups are simply labeled A, B, and C. We frequently call the flu by which animal is its main host. Human, bird, and swine are the most common strains we humans catch.

Flu A has the most serogroups (Hs and Ns), infects the most different animals, and is the most virulent. It also mutates 2-3 times faster than B. The critters it infects are mostly aquatic birds, but it can infect many other species.

Flu C is even less common and less severe.

What makes Flu unique among viruses:

Viruses enter cells so that they can make copies of themselves and spread. As they make those copies they sometimes make mistakes, creating mutations. They average one mistake per copy, so mutation is constant– what we call antigenic drift. That’s why we never get immune to Flu A–it changes every year.

There is one really cool thing about the flu virus that makes it different from most viruses: its RNA is split into 8 segments. (Most viruses have one long piece of RNA.)

This means that if your local pig catches 2 different strains of flu at the same time, these strains can trade segments. When that happens we get antigenic shifts– much larger changes for which people have no immunity. These larger shifts can create a pandemic, like the Spanish flu in 1918 that killed an estimated 21 million people. We average 3 pandemics each century. We worry a lot about pandemics.

So, those are the ABCs of the flu virus. If you crave something more useful, like what you can do about it, check out my post on colds and flu or info on fever.

Now wash those little hands with soap, keep them away from noses and mouths, break out the bleach, and go get those flu shots! The shots cover an H1N1 and H3N2 Flu A, and two strains of B.